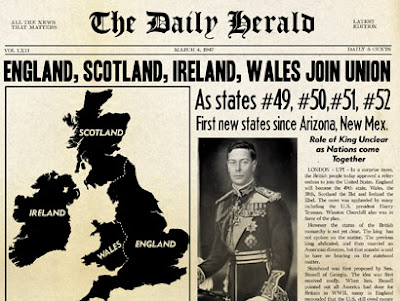 With so many Americans interested in the upcoming royal wedding, maybe it's time to re-propose another kind of marriage—the U.K. joining the U.S. Sure it sounds preposterous, but in 1947, at least one very powerful U.S. Senator was working hard to make this happen. His name was Richard Russell, Jr. of Georgia--and his plan was to add England, Scotland, Ireland and Wales as four new states. He may have been the only person on earth who thought this was a good idea. Normally, this kind of thing would be laughed off as the idea of a crackpot, but because it was proposed by a U.S. Senator, the media dutifully reported the plan.

Press reports from 1947 said the British received the idea “coldly.” How coldly? Think absolute zero. If you skipped high school chemistry, absolute zero is the coldest temperature known to exist. In theory, nothing in the universe can actually reach absolute zero—but I think maybe the British did in 1947.
Of course, they didn’t just launch into a tirade of expletives, because the British are much too sophisticated for such a coarse response. So rather than condemn Senator Russell, the plucky Brits simply pointed out that Georgia still owed money borrowed from the British during the Civil War. It was the perfect retort. Russell had assumed that America had the upper hand, because the United States had just bailed out Britain in WWII. He had forgotten that England had spent more that $200 million to help the South in the war between the states—money that was never repaid. Hmmm. Maybe this whole thing was backwards—perhaps Georgia should be added to the United Kingdom. All the 1947 shenanigans are detailed (with a nice map too) in Lost States.

Maybe it's time to resurrect this idea. If they were Americans, Prince William and Miss Catherine Middleton might move to California or New York... or Cleveland—which is something Americans would fancy. Oh, wait... we'd also get Charles and Camilla. Nevermind. Forget the whole thing.

Labels: In the news, Lost States