The next time your husband gets lost and won't ask for directions, don't be too hard on him. At least you aren't likely to die as a result. That's kind of the premise of a new movie based on a true story--one of the saddest tales of the Old West. In 1845, mountain man Stephen Meek convinced a westward-bound wagon train that he had discovered a nifty new shortcut to Oregon. They believed him 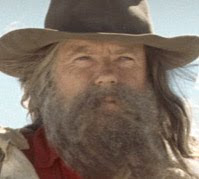 and followed Meek into the uncharted Oregon desert.  Then Stephen Meek got hopelessly lost. Soon people began dying. Needless to say, the survivors were not too happy with him. It's a fascinating story, and the new movie based on this event is in theaters now. I was surprised that none of the movie PR included a map of the cutoff... so I made one (above)--overlaying Meek's route on the Park Service map. (You can zoom in on the map). For the full story of the Meek disaster, you can read more here.
Email ThisBlogThis!Share to TwitterShare to FacebookShare to Pinterest