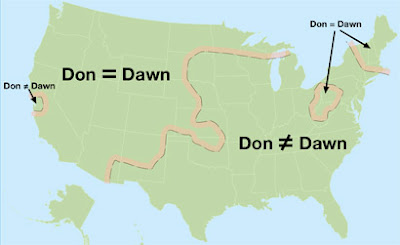 How we pronounce words can predict where we live—very precisely. Some of our pronunciation differences are fairly obvious, but most are not. Say, for example, the female name "Dawn" and the male name "Don." Being from Wisconsin, I pronounce these two names very differently. My wife, from Idaho, pronounces them exactly the same. Whether you pronounce Don/Dawn the same or differently depends largely on where you grew up on the map. (See above).

There are people who spend a career studying this stuff, which all seems very fascinating to me. The Dawn-Don difference comes from that the fact that certain Americans have 13 vowels... others lost one--they only have 12! So they use the same vowel for Don and Dawn. (same thing with "cot" and "caught.") There is a most-curious map that covers all this--made by a guy named Rick Aschmann. Rick's an incredibly impressive researcher.... but his map... well, it's hopelessly complex. Rick, you don't have to put everything you ever learned on one map! You can make 2 or 3... or 100.  I took just one line from Rick's map—Cot/Caught—and mapped it (above). Hopefully it's a bit clearer.  Rick's site also has nifty audio of people pronouncing these words. And NPR did a fun story about this recently here.
Email ThisBlogThis!Share to TwitterShare to FacebookShare to Pinterest