All 50 states mentioned in movies

I'm not sure how anyone could have enough free time to create this, but I'm glad they did. If you are studying state capitals in school, or just curious, here are all 50... through snippets in movies.
Email ThisBlogThis!Share to TwitterShare to FacebookShare to Pinterest
0 comments

Real life is ramping up—so I'm going to have less time for this blog in the coming months. It's a bit of a bummer, because creating a new map every day has been a lot of fun. But, alas, my family needs me to do stuff that actually pays the bills. I'll try to post occasionally... but the daily geographic curiosity... well, that's going on hiatus. MIKE
Email ThisBlogThis!Share to TwitterShare to FacebookShare to Pinterest
0 comments 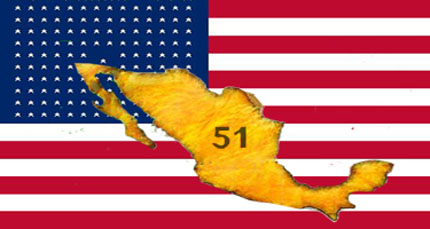 I put "fail" in quotes, because, of course, everything in Weekly World News is a silly joke. After all, this is the paper that once defended itself in a libel case by telling the judge that no one actually believes anything they write. So I wasn't all that surprised by an article that claims Mexico will be the 51st state. It's all in good fun. But what was surprising was the flag they used to illustrate the story (above). It has 140 stars! I could understand a 51-star flag, or maybe a flag with 81 stars.... adding in the 31 states of Mexico. But a 140 star flag? Does no one at the paper know how many states we have? Or did they think their audience is stupid enough to think that 50 + 1 = 140. Oh.
Email ThisBlogThis!Share to TwitterShare to FacebookShare to Pinterest
0 comments 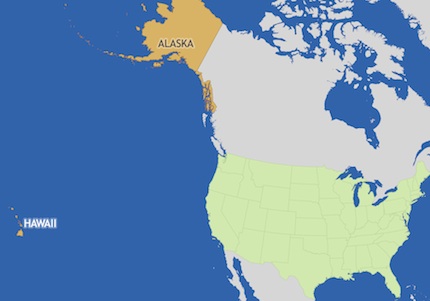 Just four US states are less than 100 years old. Can you name them? Two are so easy, I included them on the map above: Alaska and Hawaii. But can you name the other two youngsters? The answer is here.
Email ThisBlogThis!Share to TwitterShare to FacebookShare to Pinterest
0 comments 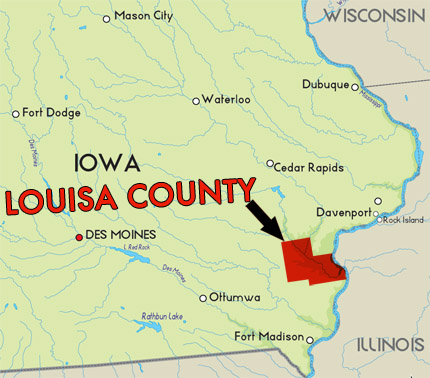 So an outsider comes to town and shoots one of the locals dead in cold blood. The shooter is then hailed as a hero, and the townfolk decide to name a county after the killer. This is the true story of Louisa County, Iowa.

In the 1830s, William Smith wanted a mining claim owned by the Massey family. So Smith and his son shot and killed Woodbury Massey... and then rode through town proclaiming that they'd kill any other Masseys they could find. At this point, Woodbury Massey's brother, Henry, took preemptive action and killed William Smith. Then the story gets interesting. 16-year-old Louisa Massey, sister of Woodbury and Henry, arrives in town and cooly proclaims she's just doing some shopping. But when she spots the younger Smith in the store, she pulls out a gun and shoots him dead too.

Louisa became an instant hero. Newspaper reports wrote: "The upper river county went wild with her praise. No war hero was ever welcomed with greater enthusiasm... cheering throngs greeted her at every stop." What is the moral of this story? I have no idea. Certainly, no one today wants 16-year-old girls involved in revenge killings. It might be one thing to exonerate Louisa, but to make her a hero, and name a county after her? It all seems very strange. You might explain it by saying that times were different then; but after Lincoln was shot, nobody was clamoring to create John Wilkes Booth county. About the only explanation I can come up with: the Smiths must have been some really mean and nasty dudes.

You can read contemporaneous news reports about Louisa Massey here. And a book here. (Another great story for a screenwriter. But who to play Louisa? Hailee Steinfeld? Dakota Fanning? Selena Gomez?)  Tweet
Email ThisBlogThis!Share to TwitterShare to FacebookShare to Pinterest
0 comments 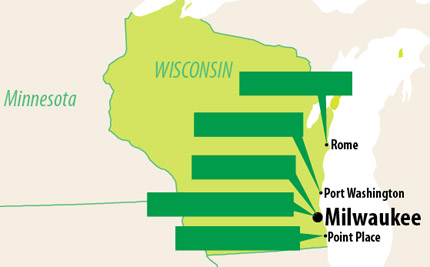 You expect TV sitcoms to be set in Los Angeles or New York. But Wisconsin? Sure enough, at least five major sitcoms have been set in the Dairy state. Why is Wisconsin so popular? I have no idea. But as a Wisconsinite, I do get a laugh every time I see mountains in the background on one of these shows. Or actors who try to have a Wisconsin accent, but invariably sound Chicago-ish. Anyway, you can see the  5 shows identified here. And if you can think of any others, let me know...
Email ThisBlogThis!Share to TwitterShare to FacebookShare to Pinterest
0 comments

Can you guess why the top sign is illegal and the bottom one is not? It's because he Federal government just doesn't like all caps—and it was forcing cities to rip down perfectly good all-cap signs and replace them with mixed-lettering signs. Until last week, that is—when common sense prevailed, and the Feds backed off on their demand. New York City alone projected the cost of changing the signs to be $27 million. Milwaukee would have needed $5 million. Even if the all-cap signs are harder to read, there is a sane way to handle this. Just replace the all-cap signs with mixed signs when they wear out. Is that so hard? Apparently it is, because it took our Federal government many months to capitulate. At the same time, I do understand that you want uniformity in traffic signs—you wouldn't want red stop signs in Iowa and purple ones in Minnesota. But ripping down a street sign only because it's all-caps? That's just bizarre. The only people in favor of that would be the sign manufacturers... hmmm.. better check their campaign contributions.Tweet
Email ThisBlogThis!Share to TwitterShare to FacebookShare to Pinterest
0 comments

Our government's geography test: full of bias and errors 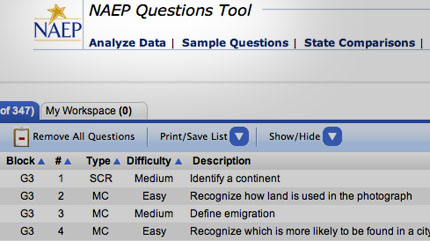 The National Association of Educational Progress is a government organization that tells us how our kids are doing in many subjects, including geography. But digging into the actual standardized test questions reveals some biased politics and bizarre geographic ideas. Let me give you one sample question that our American kids have to answer:
2010 ACTUAL QUESTION: Tropical forests are being destroyed at the rate of at least eleven million hectares each year, an area the size of Pennsylvania. About half of all tropical forests are already gone. Discuss two major reasons for this high rate of tropical deforestation.
OK, this is wrong on so many levels. Let's break it down:
"11 Million hectares destroyed"
No serious scientist today would validate this number. It dates back to a rough estimate made by a single Brazilian scientist looking at satellite photos of fires in the Amazon—in the 1980s! Yeah, it's a 30-year-old number based on sketchy information. Scientists today put the number at one-tenth that figure.
"...each year."
This implies there is a steady onslaught of rain forest destruction. Not so. There were some bad years in the 1980s, but things have changed radically since then. A report from last year showed a 90 percent drop in lost forest area.
"About half of all tropical forests are already gone"
Why is this sentence here? Seriously; it is absolutely unnecessary. The only reason to include this sentence is to make a political point.
"Tropical Forests"
This seems like an innocent phrase, but it's actually very tricky. Note how the test uses the term "tropical forest" not "tropical rain forest" That's because the test writers know full well that most deforestation in the Amazon is taking place in the chaco (dry forest) which is not an area of biodiversity. The wet tropical forests have a much slower rate of deforestation than chaco land.
"already gone"
Another subtle bias here: The word "already" is unnecessary, added to create a sense of urgency. In truth, deforestation has been going on in the Americas for hundreds of years.

Don't misunderstand—I'm not in favor of deforestation. But a standardized test isn't the place to push a point of view. And this wasn't the only question that had an obvious agenda. You can read through the questions on your own here.Tweet
Email ThisBlogThis!Share to TwitterShare to FacebookShare to Pinterest
0 comments

Labels: In the news, Map blunders 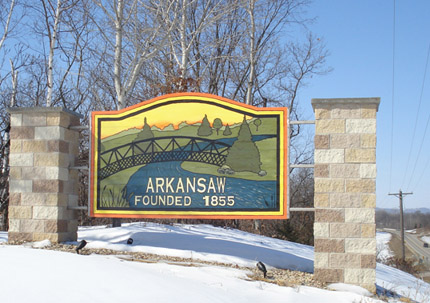 Yesterday I was driving through Tichigan. Yes, you read that right. There is a small town on Wisconsin named Tichigan. Passing through, I wondered: how many times do they have to say, "It's Tichigan, not Michigan"? It must be exhausting. That made me think there must be other places that are one letter off from famous locations—causing endless confusion. Like the beleaguered folks from Milwaukie, Oregon... or residents of The Dalles, Oregon (who at least have that weird "The" at the beginning to prevent complete confusion with Dallas, Texas). My personal favorite is a small town in Wisconsin named Arkansaw... yeah, with a "w" (above). Of course, the biggest example of this problem is Iran and Iraq; Tim Pawlenty embarrassed himself badly mixing up the two recently. Maybe that's why he left the race. See, geography really is important!
Email ThisBlogThis!Share to TwitterShare to FacebookShare to Pinterest
0 comments