How the British see the states 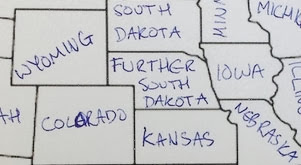 Buzzfeed asked a bunch of British people to fill in a map of the states, and many did surprisingly well—better than the average American. Some of their state names were wrong, but better than the actual names. For example, one person filled in the Nebraska space with "Middleshire." Nice. And what elementary school kid wouldn't agree that a better name for Colorado is "Squaresies." My personal favorite was the person who (working from north to south) added North Dakota, South Dakota, and Further South Dakota (above). See all the maps here.
Email ThisBlogThis!Share to TwitterShare to FacebookShare to Pinterest
0 comments

I take no pleasure in correcting the Denver Post, or their source Prof. Richard Collins, a constitutional law expert at the University of Colorado—but, well, they got it wrong yesterday. In the Post's article on state secession efforts in Colorado, writer Monte Whaley wrote, "The last time a state consented to the loss of territory was when Maine split from Massachusetts in 1820." That's not accurate. First, West Virginia split from Virginia in 1863. Thus the Virginia legislature did consent to the loss of territory. However, many would argue that the Virginia legislature that signed off wasn't the "real" legislature, it was a dummy group that was quickly formed by northern politicians when the "true" Virginia seceded from the United States.

So I can forgive Prof. Collins that oversight, but not the split of California in 1859. Southern "Californios" were so concerned about the massive influx of gold rush miners in the north, they pitched the idea of splitting California. And in 1859 the California legislature DID consent to split the state in two. The U.S. Congress did not act, but the state did, an important landmark that is often forgotten.

And if we want to get technical, there have been dozens of times that states have consented to give up small bits of territory. For example, in 1977 Texas gave away land to Mexico near the city of Rio Rico. So hopefully the Denver Post will issue a correction, and Prof Collins will pick up a copy of  Lost States ;) 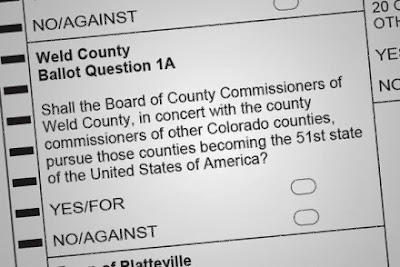 Jake Grovum at Stateline talked with me last week... and wrote a nice piece focusing on the side of the 51st state issue that is all too often forgotten. That is, the goal in places like Colorado isn't really to get a new state, it's to get the government pay attention. From that perspective, the Colorado movement has been a big success. Read more here.