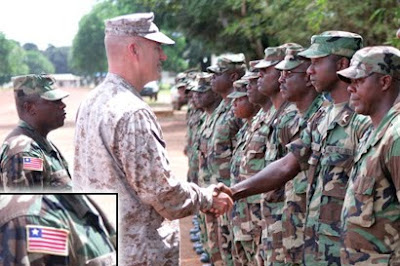 When a U.S. military leader "looks at" Liberia as the 51st state, of course, I'm going to take notice. Liberia was actually in the book Lost States, until the publisher had to remove it for space considerations at the last minute. The forward thinking military man is U.S. Marine Master Sergeant Monte C. Stevens, senior enlisted advisor with Operation ONWARD LIBERTY" (How does that fit on his uniform?). The official press release from U.S. Africa Command says "Stevens looks at Liberia as America's 51st state." It's nifty that a government leader made that connection.

In the original manuscript of Lost States,  I wrote: During the mid-1800s, Liberia was an American state. Not officially, of course, but I think you’ll agree that the resemblance was strong enough to merit its inclusion in this book. A peek into the history, culture, and loyalty of the Liberian people reveals the most state-like character you’ll find outside the official 50. Here’s what happened: In 1847, the United States wholeheartedly supported the founding of a mini-America on the west African coast. The idea was to create a place for freed slaves to live in peace. There was just one hitch: Ex-slaves returning to Africa had spent generations in the United States. They were Americans. So when they arrived in Africa, they attempted to set up American institutions. Thus the culture that developed in Liberia reflected the pre-Civil War south, not traditional Africa. The Liberians spoke English, named their cities after the United States’ founding fathers, and even created an American-style flag. If this all seems a bit odd, it shouldn’t. People are products of their surrounding culture, not their ancestry. And that points to the biggest problem faced by the returning ex-slaves. That is, they didn’t have much in common with the Africans who never left. The ex-slaves, dubbed Americo-Liberians, ruled Liberia for more than 200 years, even though they were vastly outnumbered by the native Africans who also called Liberia home. Ethnic tensions gradually rose, leading to a military coup in 1980. That marked the end of legitimate elections, as Liberia devolved into a strongman dictatorship. It’s a sad ending for an idea that began with so much hope and optimism.

While it's fun to see Monte C. Stevens make the same "leap" statehood, I'm even more encouraged by his support of the Liberian people. He said, "This is the most fulfilling assignment I've had in 21 years of service. We are building a relationship here that will never end, and I feel blessed to be a part of it."

If you have any doubt about the Liberian-American connection, check out the flag on the Liberian uniform above.
Email ThisBlogThis!Share to TwitterShare to FacebookShare to Pinterest
0 comments

Pickles and the 53rd state

It looks like an example of product placement in a comic strip, but I'm not that clever. Nonetheless, I think it's cool that one of my favorite comics, "Pickles," made the strongest case yet for adding new US states. See it full size here. (And thanks Fred Bersch, for pointing this out)
Email ThisBlogThis!Share to TwitterShare to FacebookShare to Pinterest
0 comments

4 in 10 Americans want to annex Canada 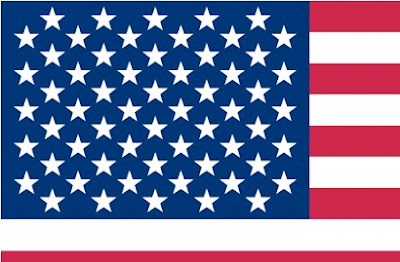 A very well-administered poll by Leger Marketing of Montreal found that nearly four in 10 Americans favor annexing Canada. So should we get ready to fly a 60-star flag (ABOVE)? Not quite yet. The same poll found only 2 in 10 Canadians wanted to join the U.S. That statistic makes it seem like Canadians have a low opinion of the U.S.--then again, nearly 60 percent of our northern neighbors are in favor of adopting the U.S. dollar as their national currency. Yes, you read that right... they like our money, but don't want to become citizens. That's kinda like the boyfriend who wants all the privileges of living together, but doesn't want to get married. C'mon Canadians, time to commit. And if you don't want to lose your unique culture, maybe we should join you. Yeah, if Canada annexes the U.S., then America's huge national debt would go "poof" because there would be no America. (Enough silly ranting... but do check out the poll here)
Email ThisBlogThis!Share to TwitterShare to FacebookShare to Pinterest
0 comments 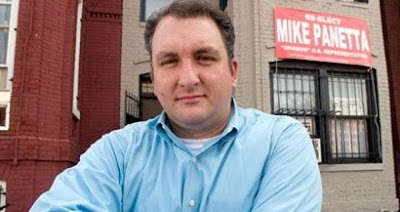 The 51st state of Washington DC elected it's representative to Congress Tuesday. OK, so Washington DC isn't a state yet. But like most wannabe states, they do have an official-like election to chose a "shadow" representative. The winner receives permission to wander around Congress and pretend; he gets to sit in a special chair and probably wear a secret decoder ring. No disrespect to winner Mike Panetta (above) ... it's just that shadow representatives don't get to do the important stuff... like vote. But I wish him all the best in his 51st state quest. And his 51st state license plates are really cool. I want one.
Email ThisBlogThis!Share to TwitterShare to FacebookShare to Pinterest
0 comments