Divide Libya - and return to the borders of antiquity 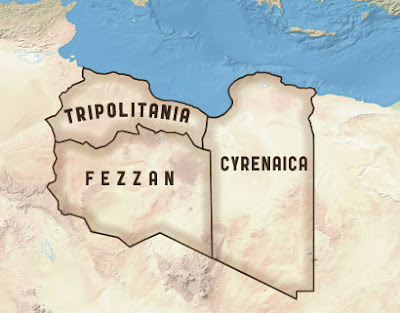 Should Libya be partitioned into two (or three?) separate nations to solve the conflict there? Many major players in the conflict are suggesting just that. It's an idea that makes sense; in fact, what is now Libya is an artificial creation of the 20th century—a Frankenation that never should have been created in the first place.
The east and west (Tripolitania and Cyrenaica) have always been divided by geography—the Gulf of Sirte separates the population centers of Tripoli in the west and Benghazi in the east. And the unique desert community of Fezzan has operated separately for thousands of years.
It was only the Europeans who thought these regions should be cobbled together into one. Blame the Italians, mostly. They colonized the region back when that was the thing to do. But they knew better than to pretend this was one unified people. In fact, it's really interesting to look at this big 1829 map of north Africa. Created by the French (also colonizers of north Africa) you can see that Europeans 200 years ago understood this was three nations, not one. (Really, it's a cool map)
Email ThisBlogThis!Share to TwitterShare to FacebookShare to Pinterest