DC Statehood = an end to civilization? 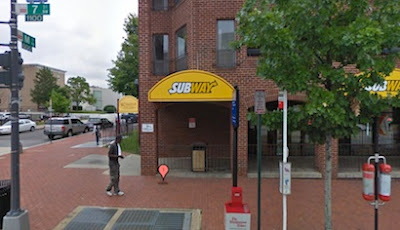 Well, that's not exactly what the National Review wrote, but it's close. According to Julia Shaw, making the District of Columbia the 51st state would, "...undermine the entire structure of our government." Yikes, that sounds scary! Her point is that you don't want the White House, the Capitol or other major federal buildings sitting on the soil of some state.... a state that might get its way by turning off the electricity to Oval Office. Sure, we get that. But a whole lot of DC isn't quite so central to the smooth running of the most powerful nation on earth. Take for example, the Subway Sandwich shop at 1165 7th Street Northwest in DC. If that dispensary of tasty lunches was suddenly in the 51st state of New Columbia—or maybe in a part of Maryland—would that really  "...undermine the entire structure of our government."?? And let's be honest, most of DC is filled with the same fast food restaurants, bland apartments, and soulless office suites that populate the rest of America.

Arlington, Virginia was once a part of the District of Columbia... until everyone realized it would not "undermine the entire structure of our government" if that portion of the district became a portion of an actual state. There are good reasons for DC to become a state, and some good reasons for it not to become a state (like minimal land). But "undermining the entire structure of our government" is a bit overwrought.  You could carve out a slimmed down district around the mall, and let the rest of DC—the parts where people actually live, get the equality it deserves, by statehood or "retrocession" to Maryland. The world will not end if that happens. I hope!
Email ThisBlogThis!Share to TwitterShare to FacebookShare to Pinterest