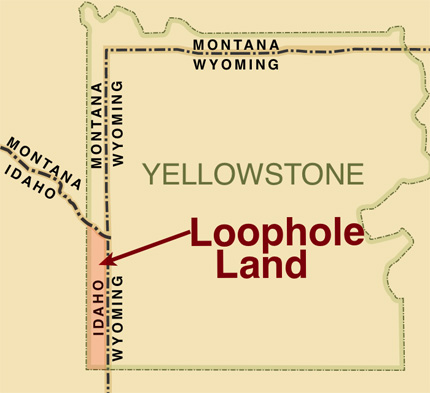 According to a law professor from Michigan, there is small section if Idaho where major crimes can not be prosecuted—thanks to a giant blunder by Congress.

Stay with me here.... so let's say you commit a murder in the portion of Idaho that's in the park (The red "Loophole Land" on my map). You'd be arrested and bound over for trial in the US District court in Cheyenne, Wyoming. But Article III of the Constitution states that the trial must be held in the state where the crime was committed—in this case Idaho. So you are sent to Idaho for trial. No problem there. But the Sixth Amendment also says that the jury must be drawn from the state and District where the crime was committed. The state is Idaho... but the District is the Wyoming District (which includes the sliver of Idaho that's in the park). So the jury would have to be drawn from residents who live in the portion of Idaho that lies in the park.

And that's where it gets interesting: nobody lives in that patch of Idaho. Nobody. No jury pool means no trial, means you go free.

This curious loophole was discovered by Prof. Brian C. Kalt, a respected legal scholar from Michigan State University. Georgetown Law Journal is reporting on the matter in an upcoming issue. (You can read Kalt's full article here)

Of course, committing crimes is bad. Don't do it. But if you're a screenwriter, this is great stuff! Maybe Dick Wolf will start a new series Law and Order: Idaho just to take advantage of this legal anomaly.

And if all this wasn't bizarre enough, Idaho's "Loophole Land" is just a few steps from another patch of American soil that also fell outside the law. Dubbed "Lost Dakota" it was a few acres of land that—erroneously—were not part of any state and thus, theoretically, outside the reach of law enforcement. (Much more on this in my book Lost States) Eventually that situation was fixed when Lost Dakota became a part of Montana. But Loophole Land remains an unsettling, well, loophole. If your nemesis suggests a camping trip near the Idaho/Wyoming border.... don't go!!!
Email ThisBlogThis!Share to TwitterShare to FacebookShare to Pinterest