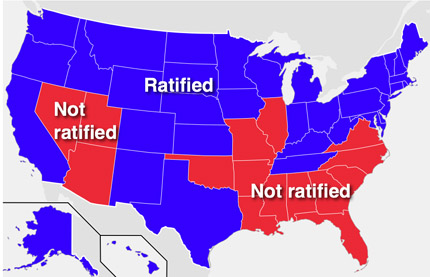 Do you think women should have the same rights as men? In at least 15 U.S states, the legislature is not so sure. The Equal Rights Amendment is not the law of the land, because more than a dozen state legislatures have voted against it. And this isn’t some complex 5,000-page omnibus proposal. The ERA is just 24 words: “Equality of rights under the law shall not be denied or abridged by the United States or by any State on account of sex.” Back in the 1970s when this was hotly debated, opponents said that passing the ERA would mean unisex bathrooms, and women fighting on the front lines in war. The notion that men and women are not identical (very true last time I checked) got mixed up with question of equal rights. People got scared and the whole thing crashed and burned just 3 states short of approval. Opposition was fiercest in the south, but even Illinois couldn’t find the votes to ratify the amendment.

Creating a map of this debate is revealing. Many of the the traditional red states in the mountain west split from their brethren in the south on this issue. That’s because—historically—westerners have held a slightly different perspective on the role of women. For example, Wyoming was the first state to allow women to vote. Partly, this has to do with an understanding that it took particularly robust women to survive in the harsh conditions of the pioneering west. If you’re a gal who's tough enough to chop the head off a chicken, go months without bathing, and live in a sod house, no one’s going to tell you you can’t vote. Put another way, those Little House on the Prairie girls are a lot more scrappy than Scarlett O’Hara.
Email ThisBlogThis!Share to TwitterShare to FacebookShare to Pinterest