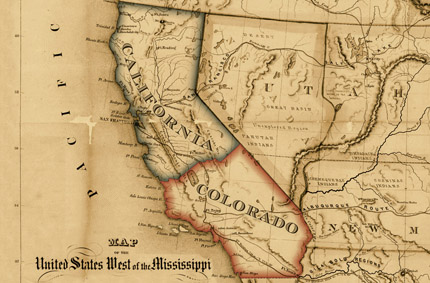 It's true. The California state legislature approved splitting the state in two... back in 1859. The US Constitution Article IV Section 3 states that all it takes to split a state (and thus create a new state) is to get approval of the state legislature and the US Congress. Signoff by a state legislature has occurred three times in American history.
1) Massachusetts voted to set its northern district free to become Maine in 1820.
2) In the Civil War era, the "restored" Virginia government voted to create West Virginia. (There is considerable dispute about the legality of this vote, however).
3) California's legislature voted to split the state in two in 1859.

The first two votes resulted in new states, but California never got officially sliced. Why? The US Congress refused to ratify the plan, because they were worried that a new state would upset the tenuous balance between north and south. Of course, that "balance" was upset shortly thereafter anyway—when the Civil War broke out. Above is the split that the California legislature approved... hoping to create the new state of "Colorado." This week, California legislator Jeff Stone proposed a new split. But his goofy plan certainly doesn't have the support that the 1859 plan had. Hmmm. Maybe in some dusty back room in the US Capitol, the 1859 plan is still sitting there, waiting for Congress to finally give it the thumbs up.
Email ThisBlogThis!Share to TwitterShare to FacebookShare to Pinterest