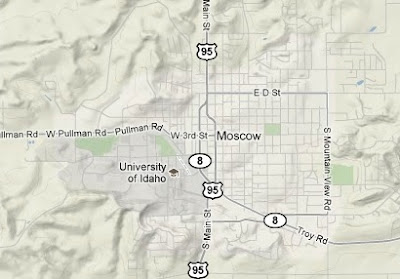 Many American cities are named after after famous places in the old world, but they're often pronounced very differently. I've been to Berlin, Wisconsin—but no cheesehead calls their city "burr-LINN" like the capital of Germany. Instead Wisconsinites pronounce their town "BURR-linn" with the emphasis on the first syllable. So it's altogether normal for a Wisconsinite traveling from Berlin, Wisconsin to Berlin, Germany to say he's going from BURR-linn to bur-LINN.

I long thought that maybe this was a result of Americans trying to distance themselves from unpopular regimes in the old world. But now I'm not so sure. After all, Cairo, Illinois is pronounced "KAY-row." And Egypt's never had a dictator bent on world domination... well, as far as we know. So chime in readers on your famous-city-names-pronounced-differently. Is Tripoli, Iowa really pronounced "Trip-OH-luh"? Is Palestine, Texas really "Pal-ess-TEEN." Chime in!
Email ThisBlogThis!Share to TwitterShare to FacebookShare to Pinterest